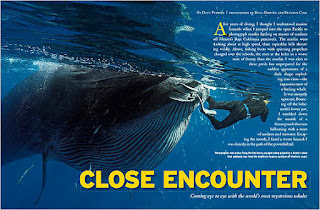 
One of my luckiest and most memorable encounters at sea happened off Mexico's Baja peninsula years ago when searching for striped marlin. In addition to finding and photographing these rarely sighted billfish, we were surprised by Bryde's Whales. We witnessed an amazing spectacle, dozens of marlin (as well as sea lions, dolphins, and several Bryde's Whales) attacking baitballs of sardines and mackerel. The resulting photos, and the story behind this "trial of life" was first published in the National Geographic magazine, then subsequently featured in many other magazines around the world. The latest is National Wildlife, for sale at newsstands now. Friend and fellow marine photographer Doug Perrine, my dive buddy on the shoot, wrote this article and as always did a splendid job. The opening picture is one I made showing Doug bouncing off the snout of a Bryde's Whale. Additional pictures of mine illustrate the gulp feeding behavior of this speedy, relatively unknown baleen whale species. Check it out: