LOOKING BACK- 2014 THROUGH THE LENS 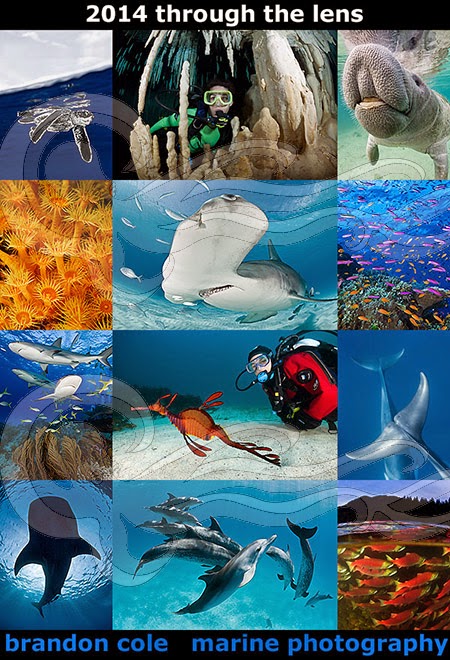 We are most grateful for your support in 2014. Your continued interest in our imagery is instrumental in keeping us afloat in this ever changing, ever challenging, and ever rewarding business. The photomontage above is a pictorial summary of 2014, touching on a few of the amazing things we were fortunate to witness in our ongoing quest to build the most dynamic underwater photo library around.


We began the year snorkeling with gentle Florida Manatees, and then diving with enigmatic Great Hammerhead Sharks in the Bahamas, creating stunning pictures of this striking species, as well as documenting marine biologists at work.
After this we turned 180 degrees and crossed the Pacific, all the way to Tasmania to explore truly unique kelp forest and sponge garden habitats, home to rare species such as sea dragons and handfish. Australia's Great Barrier Reef was our studio for photographing curious Minke Whales and colorful coral reef species.

Leaving the South Pacific in the depths of their winter, we were called back to the Bahamas to swim with sea turtles, sharks, and dolphins. Our portfolio from this island nation continues to grow and is sure to impress. Need visuals of Tiger Sharks? How about dozens of wild spotted dolphins in clear water? We have both, and so much more from the Bahamas.

Mexico has long been another favorite of Brandon Cole Marine Photography. We were drawn back to the Yucatan Peninsula in August, timing our visit with the world's largest gathering of feeding Whale Sharks. Epic! Then we took advantage of the freshwater springs to rinse away the saltwater. Slipping into the cenotes opened doors into the shadowy Mayan underworld, a vast network of sunken chambers decorated with stalactites and illuminated by otherworldly light shows.

As 2014 drew to a close we packed up our camper truck and drove north into Canada to behold the saga of the sockeye salmon. After four years at sea, these red and green super fish have survived a gauntlet of obstacles to return to the freshwater streams in which they were born. Their mission- to spawn and die. It's among the most inspirational stories we've ever covered. We can't wait to show you the new photos and video footage.
Now it's time to submerge once again. First stop for 2015 is Egypt's Red Sea, to photograph dugongs, cousins to the manatees we met exactly one year ago. After that, the coral kingdom of Indonesia beckons, specifically Komodo and Flores, marine biodiversity hotspots both. Assuming we come up for air, we have a date with basking sharks in the UK. Then humpback whales in Tonga, great white sharks in Mexico, California kelp forest critters... you get the picture. With your partnership, we'll do our best to bring back new pictures to help bring your projects to life.